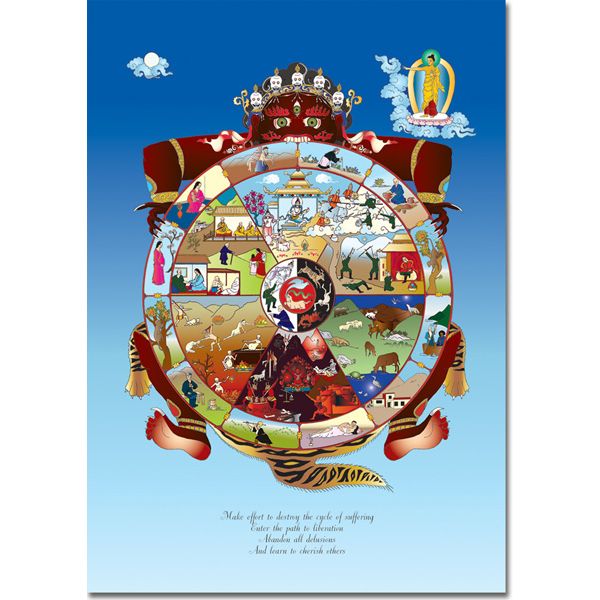 The Wheel of Life represents true sufferings and true origins, revealing how true sufferings arise in dependence upon true origins.
In stock
ISBN/SKU:
GRP-ART-WOL
Facebook Twitter LinkedIn Google + Email
Add to Wish List Add to Compare
Email
Details
A symbolic representation that reveals the nature and causes of samsara, the first two noble truths – true sufferings and true origins – and the complete path to liberation. The Wheel of Life is drawn within the clutches of Yama, the Lord of Death, reminding us of impermanence and showing that there is not a single being in this Wheel of Life who is outside the control of death. Yama holds the Wheel in his mouth and embraces it with his claws, indicating that all living beings repeatedly go through the jaws of death. Outside the Wheel of Life Buddha stands pointing to a moon, which shows that Buddhas are outside samsara because they have become liberated by abandoning samsaric paths and attaining true paths. The moon represents true cessations. By pointing at the moon Buddha is saying ‘I have travelled along liberated paths and attained the city of liberation.’
More Information